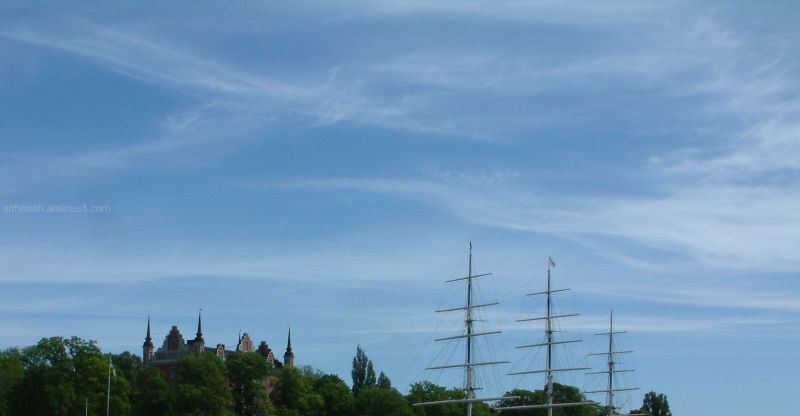 Posted by sithenah (Greater Manchester/Cheshire, United Kingdom) on 21 November 2008 in Transportation and Portfolio.

The sails belong to the af-Chapman

It entered service as the Dunboyne in 1888 and once carried passengers between Ireland and Australia. During World War II it was a Swedish Navy barracks ship.

Shortly after this picture was taken, it was towed away for renovation, but returned in 2008.

Check out other contributors to Sky Watch Friday.

The colors are very soft looking and I like the ship partially in the photo too.

What a fascinating shot! Love the soft, fine swirls of cloud behind the ship masts!

Gerald: That is a really nice capture of the sky by the sea.

like this photo for a couple of reasons...the masts mirror the spires of the church...sky is very pretty too with the swirly clouds.

thanks for sharing with us.

I like how the masts and the spires relate, here.

Musings from Hawaii from United States

I love your wispy clouds against that gorgeous blue sky. Wonderful! Thank you for sharing your sky with us. Have a great weekend.

Personally I would have liked less sky and more ship...