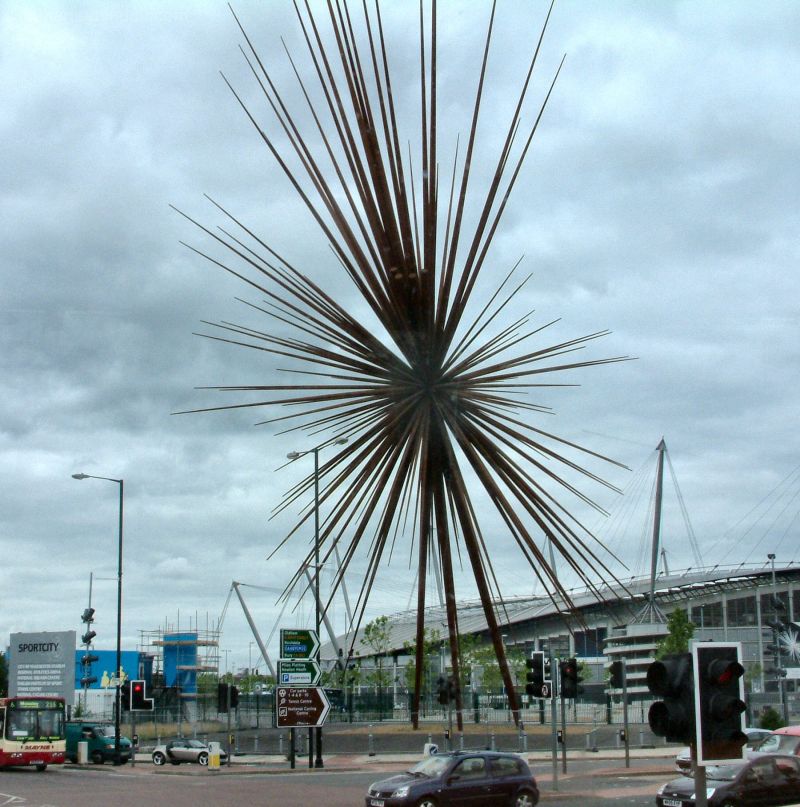 The "B of the Bang", erected in 2004 outside the City of Manchester Stadium, was designed as a tribute to the 2002 Commonwealth Games and was named after British sprinter Linford Christie's famous saying: "I'll be gone by the B of the Bang."

The 184ft (56m) sculpture, designed to look like a fireworks explosion, was made up of 200 solid steel columns. Welders spent several hours securing five of its 82ft (25m) tapered legs to the ground.

This photograph was taken in July 2006 from the top of a passing double-deck bus.

The latest news is that it is to be taken down after being blighted by safety concerns and a legal row. One of its 180 steel spikes was dislodged within two weeks of its erection and 22 have since been removed from the sculpture.

Check out other contributors to Sky Watch Friday.

Now I know something new...thanks for sharing.
The photo is very beautiful, is the winter over?
Have a happy weekend!!

That's quite an eye catcher, but a bit big if you ask me.

A strange Bang that gets steadily smaller. Maybe it is finning that Christie got the B and that the rest just falls apart?

Lethal Weapon. I thought this was coming down after it's spikes came loose. It's a really impressive image.

@babooshka: The latest news is indeed that it will be coming down.

manchester sculpture of the bang linford