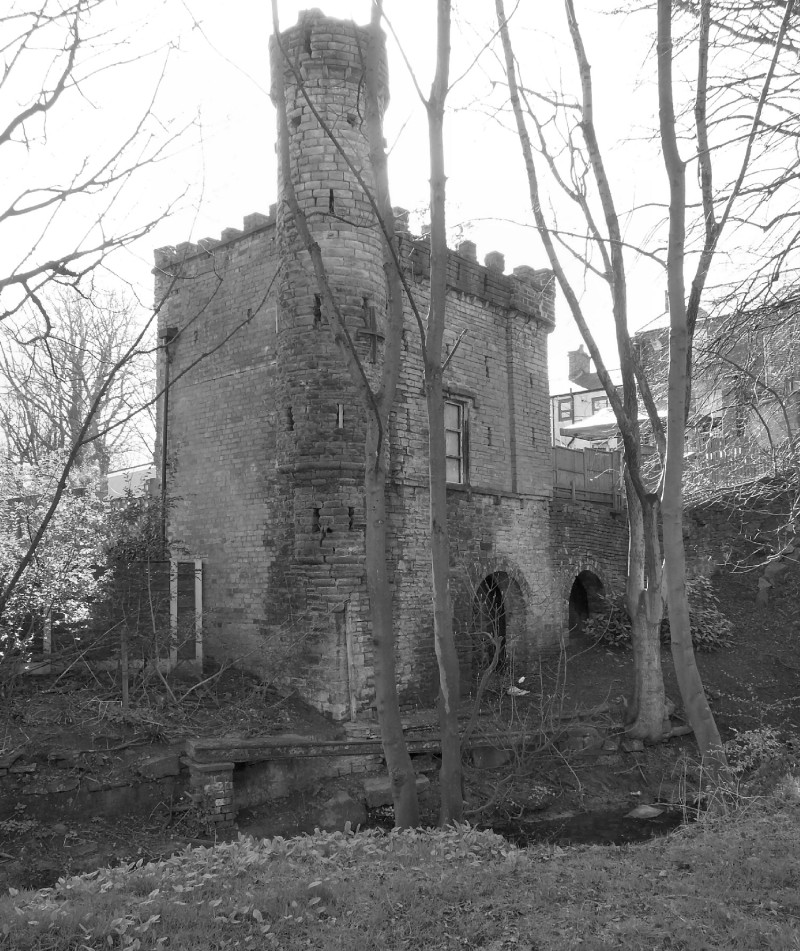 Posted by sithenah (Greater Manchester/Cheshire, United Kingdom) on 21 April 2012 in Architecture and Portfolio.

The castellated folly castle overlooking Godley Brook lies in the back garden of Brookbank House. The house was built in 1837 by Joseph Hibbert, the sixth of fourteen children of Randal Hibbert. The Hibbert family of Godley played an important part in the history of Hyde and its neighborhood, figuring amongst the pioneers of the cotton industry.

The castle folly was probably built around the mid part of the 19th century. In the mid-1990s there were plans by the then owners to restore the building and open it up to the public. See Hyde Cheshire.

Now it belongs to the Brookbank Day Nursery and public access to the folly is not permitted. It can however be viewed from this footpath on the North side of the Godley Brook.

Other views of the folly can be seen on Hyde Daily Photo and Hyde DP Xtra.

A contribution to The Weekend in Black and White.

I find it an unusually attractive folly. Excellent photo.

Oh, it is a wonderful little castle. I wish it was open and restored so people could go inside. So glad you were able to shoot it from nearby. I think castles are so romantic. I really do like the architectural style. genie

Between having troubles with my old computer back at the beginning of the year, and finally getting one, I totally forgot your site here...going to enjoy going back when I have time and seeing what I missed!

glad you found this again - it is good trawl archives