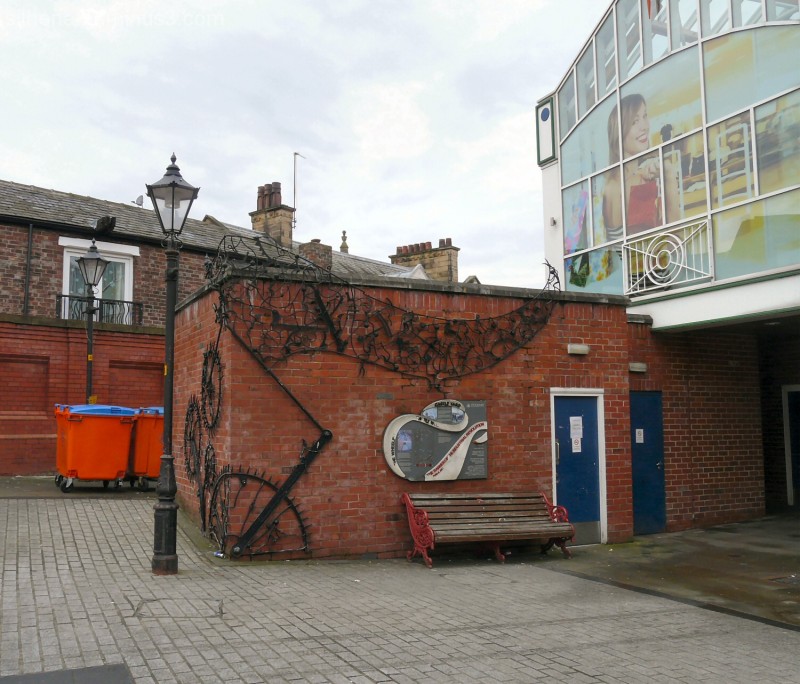 Posted by sithenah (Greater Manchester/Cheshire, United Kingdom) on 29 January 2013 in Architecture and Portfolio.

Castle Yard was the "Motte" of a Norman castle and the castle "Bailey" the area which is now the Market Place. The castle walls were demolished in the 1770s when Castle Mill, the first water powered cotton mill in Stockport was constructed. The Mill was demolished in 1841 and from 1853 the area was used as a cattle market. Today Castle Yard forms a link between the outside market and the Courts shopping development created from the conversion of the adjacent former Magistrates Courts building.

21st century excavations revealed the wheelpit. In 2005 artist Mike Woods created a piece of public art designed on the water wheel which once powered Castle Mill. It consists of a banner that depicts workers caught up in a "mad whirl of machines and knotted tangled threads coupled with frenzied activity as they strive to adapt new technologies and the need to keep pace with the constantly changing new industrial age".

"The Banner of the Industrial Revelution" is wrapped around the outside of the ladies public convenience.

A contribution to ABC Wednesday

Love the art piece, but I wished that they had put it on a bigger wall, to make it really shine! Thanks for sharing!

What a history! Loved the detail in your capture and the back story too.