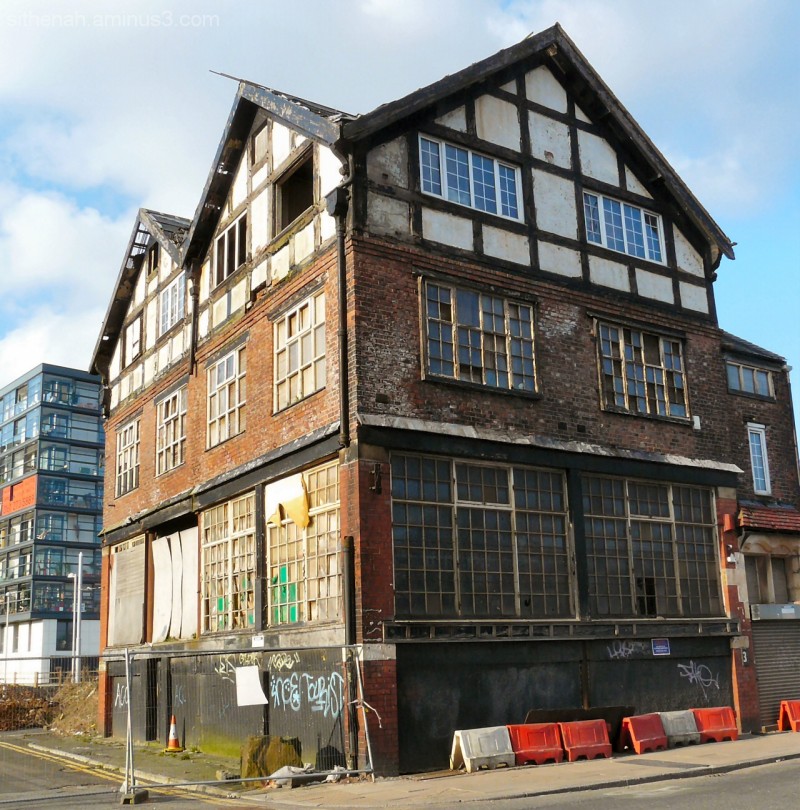 Posted by sithenah (Greater Manchester/Cheshire, United Kingdom) on 11 March 2013 in Architecture and Portfolio.

Hetherington's Private Dining Rooms stands on the corner of Pollard Street and Boond Street and has been empty since at least 1999. This building dates from 1889 and was built as a private dining rooms for John Hetherington & Sons of Vulcan Works, Pollard Street. It was designed by Stott & Sons, the Oldham & Manchester architects who were noted cotton mill architects. The building control plans survive in the care of Manchester City Council. The Private Dining Rooms would not have been a works canteen but would have been for the directors and entertaining of customers. The dining room itself occupied the raised ground floor, above a semi-basement, and had large windows; the diners would have been able to keep an eye on comings and goings at the works! The top storey was a flat for the caretaker, but the plans do not state what the first floor was used for, possibly this was the kitchen with the basement being used for storage. There was a hoist serving all floors. The structure is divided into four bays by steel girders supported by cast-iron columns which have spiral decoration to the capitals.

In the background is Milliners Wharf, located between the Ashton Canal and the New Islington tram stop. It was built on the site of the former Hat Box factory, the first phase of this new build apartment scheme comprises 261 studio, one, two and three bed apartments.

What a fantastic find - thanks so much for sharing it with us! If those windows could talk...

What a lovely old building. It would be wonderful I think if someone would totally refurbish it back to its original glory. Though perhaps it has decayed beyond that possibility by now.

I go past this every day to and from work in Manchester. It's a beautiful old building that looks as if it's just being allowed to fall into decay so they can demolish it. Such a shame - if I was a millionaire, I'd be spending all my money on bringing these old beauties back to life!

@Jayne: Thanks Jayne - it's as much a shame as what is happening to the nearby Ancoats Dispensary.

Alas it has since been demolished.