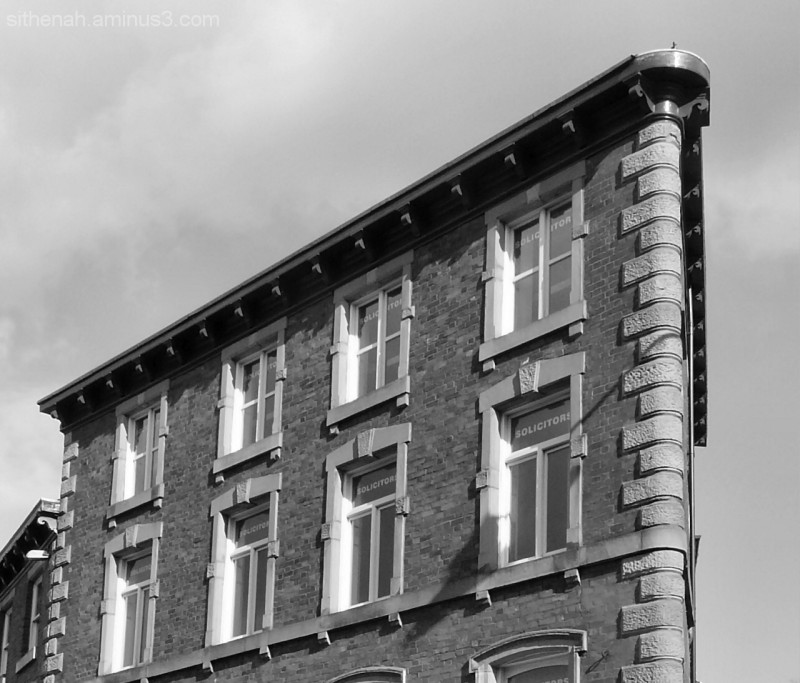 Posted by sithenah (Greater Manchester/Cheshire, United Kingdom) on 5 April 2013 in Architecture and Portfolio.

A listed building at 6-10 Millgate, records suggest that it may have been the premises of a wholesale grocery business in the late 19th century. The building is of brick with stone dressings, of four storeys, with a full-height loading slot, left side. The ground floor was of stone but much of it has been replaced in brick, late 20th century. Deep bracketed eaves course, stone quoins. The building is canted to the curve of the street, and there are quoins at this point. Windows are generally in ornamented stone surrounds, those of the first and second floor with a sill band. The Italianate architectural style is closely related to commercial warehouse design in late 19th century Manchester typified by warehouses of the 1860s-80s by the firm Clegg & Knowles.

Until recently it was occupied by Gorvins Solicitors.

A contribution to The Weekend in Black and White.

Space is at a minimum in the end rooms. Nice image!

Fascinating building. The rooms must be very oddly shaped.

fantastic b&W of this fascinating structure!

@Lucy Corrander: I always like to be able to find things out about what I photograph - glad you appreciate it.

I'm always fascinated by buildings like this one...and wonder what it would be like to be inside...looking at that narrow corner...would there be a closet? Would there be a decorative feature? Could a chair fit there???