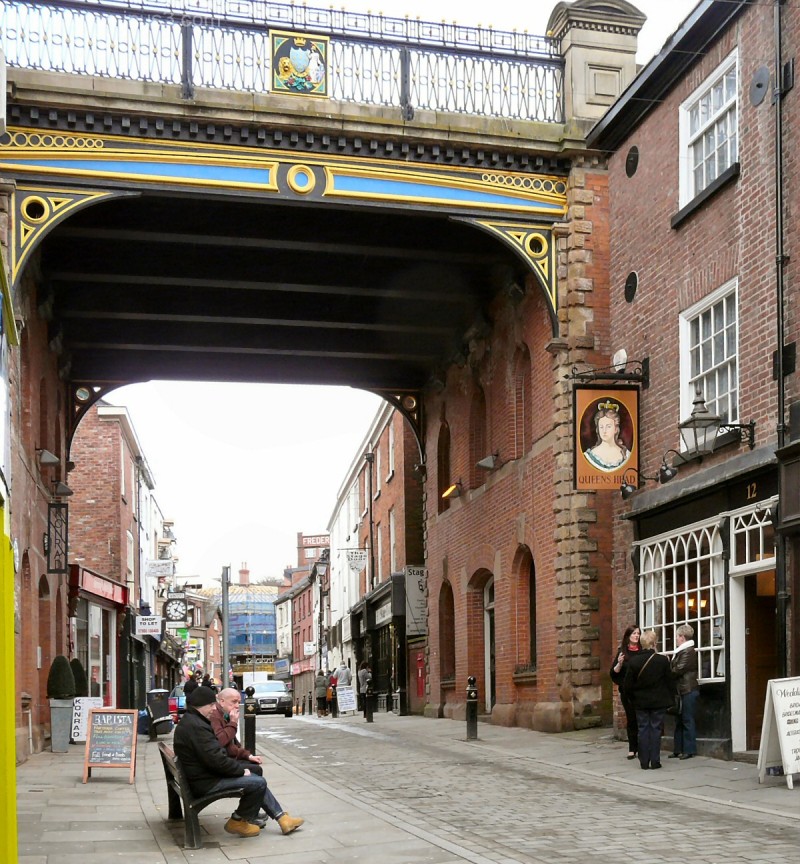 In 1860, Stockport Council authorised the construction of a glazed and cast-iron covered market in Market Place. Little Underbank lies in the natural ravine of Tin Brook, to the south side of the Market Place, which caused problems of access to the market. In 1864, it was decided to build a bridge over Little Underbank, linking the Market Place with St Petersgate, to provide an easier approach from the west of the town and Edgeley Railway Station. St Petersgate Bridge was constructed in 1866-8.

## 10-12 Little Underbank on the right was built in the late C18 or early C19 on the south side of Little Underbank. The 1849 1:1056 Ordnance Survey map shows the building originally abutted a larger building on its east side, identified as the Queen's Head Public House. The latter was demolished when St Petersgate Bridge was built in 1866-8, and it appears that at this point the public house moved into No. 12 Little Underbank. The pub fixtures and fittings confirm this, being of a later C19 date. There has been some late C20 remodelling retaining many original features.

I like that kind of city phptography. The real street. Nice

PLEASE delete my above comment. It is NOT my webpage!!!
To much trouble to leave a comment here.
Sorry, I will not try again.
Nice and interesting blog though! Best of luck!

Hey Gunn - sorry if the comment system here is a problem - you left a link to Tanty's lovely old Stavanger blog - your's is http://stavangerdailyphotobygw.blogspot.no/ - aminus3 uses what is known as BBC coding for links rather than HTML and you don't actually have to leave a link back to comment.

The bridge is wonderful and so is the rest of the photo. Lots of interesting things to see.