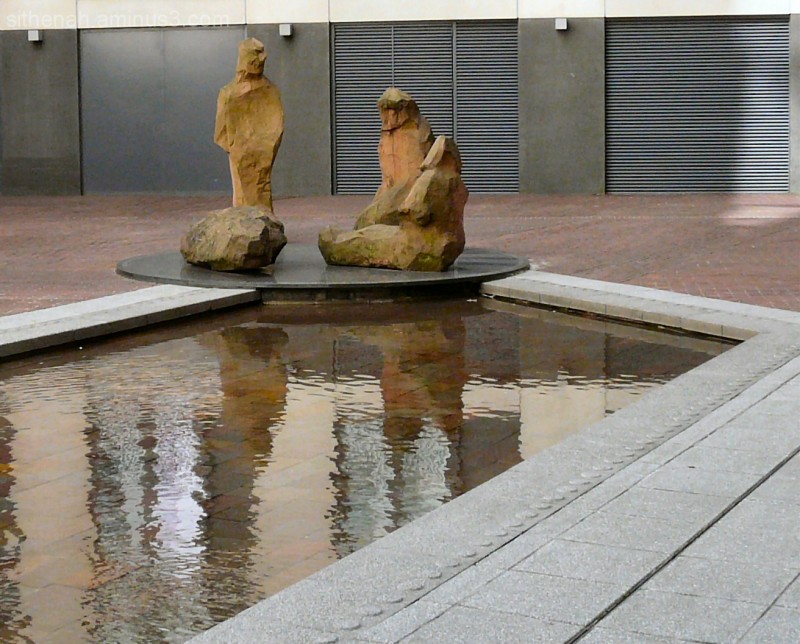 The Still Point is a sculpture carved from Cumbrian sand stone by Colin Spofforth commissioned by Argent Group in 2008 and installed in 2009.

It is found somewhat hidden within the courtyard of the Piccadilly Place group of highrise offices between London Road and Aytoun Street, Manchester.

The four figures represent human forms whilst remaining stone like. The 2m tall figures stand within a polished granite circle. Around the base is a quotation "At the still point of the turning world. Neither the flesh nor fleshness. Neither from nor toward; at the still point, there the dance is, but neither arrest nor movement. Where the past and future gathered. T.S.Eliot."

See a closer view of the base on Ackworth born, gone West

I just love the composition of your picture... You pointed a perfect point of view on this terrific sculpture... Thanks for the sharing !

@'Tsuki: Thanks - I took photos from a variety of angles.

Interesting sculpture, and your composition is ecxellent!

I like it and the reflection makes it even better.

I would never have guessed that this was in London. Tis a beautiful shot and reflections.

@Ruth: It isn't LONDON - It is MANCHESTER!